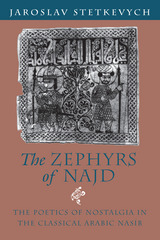 Arabs have traditionally considered classical Arabic poetry, together with the Qur'an, as one of their supreme cultural accomplishments. Taking a comparatist approach, Jaroslav Stetkevych attempts in this book to integrate the classical Arabic lyric into an enlarged understanding of lyric poetry as a genre.

Stetkevych concentrates on the "places of lost bliss" that furnish the dominant motif in the lyric-elegiac opening section (nasib) of the classic Arab code, or qusidah. In defining the Arabic lyrical genre, he shows how pre-Islamic lamentations over abandoned campsites evolved, in Arabo-Islamic mystical poetry, into expressions of spiritual nostalgia. Stetkevych also draws intriguing parallels between the highlands of Najd in Arabic poetry and Arcadia in the European tradition. He concludes by exploring the degree to which the pastoral-paradisiacal archetype of the nasib pervades Arabic literary perception, from the pre-Islamic ode through the Thousand and One Nights and later texts.

Enhanced by Stetkevych's sensitive translations of all the Arabic texts discussed, The Zephyrs of Najd brings the classical Arabic ode fully into the purview of contemporary literary and critical discourse.
TABLE OF CONTENTS


Acknowledgments
Preface
1. Arabic Lyricism and Its Structure: The Nasib within the Qasidah
1. The Poem as Rhetorical and Epideictic Strategy
2. Ut Musica Poesis: The Qasidah as Sonata—The Nasib as Sonata Form
3. Toward the Ternary Archetype
2. The Nasib: From Archaic Tears to Spiritual Pilgrimages
1. The Tolerance of the Archaic Vision
2. The Freeing of the Metaphor: Hassan Ibn Thabit
3. Toward the Courtly Idyll with Abu al-'Atahiyah
4. The Stylizing Imagination: Silences and Voices of the Desert from Dhu al-Rummah to Ibn Khafajah
5. The Delicate Balancing of a Stubborn Structure: Ibn al-Farid
3. Names, Privileged Places, Idylls
1. When Toponymy Becomes Poetry
2. Najd and Arcadia: The Topology of Nostalgia
4. Meadows in the Sky
1. Of Pastors and Their Dreams: A Digression into Common Grounds
2. Toward a Cosmic Pastoral Space
5. In Search of the Garden
1. On the Perhiphery of Autochthony
2. Spaces of Delight: Perceived, Lost, Remembered
Appendix of Arabic Texts
Notes
Bibliography
Index