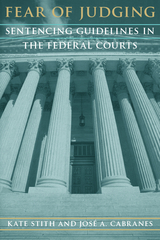 For two centuries, federal judges exercised wide discretion in criminal sentencing. This changed in 1987, when a hopelessly complex bureaucratic apparatus was imposed on the federal courts. Though termed Sentencing "Guidelines," the new sentencing rules are mandatory. Reformers hoped that the Sentencing Guidelines would address inequities in sentencing. The Guidelines have failed to achieve this goal, according to Kate Stith and José Cabranes, and they have sacrificed comprehensibility and common sense.

Fear of Judging is the first full-scale history, analysis, and critique of the new sentencing regime. The authors show that the present system has burdened the courts, dehumanized the sentencing process, and, by repressing judicial discretion, eroded the constitutional balance of powers. Eschewing ideological or politically oriented critiques of the Guidelines and offering alternatives to the current system, Stith and Cabranes defend a vision of justice that requires judges to perform what has traditionally been considered their central task—exercising judgment.
TABLE OF CONTENTS