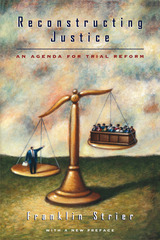 Reconstructing Justice: An Agenda for Trial Reform
by Franklin Strier
University of Chicago Press, 1996
Paper: 978-0-226-77718-4
In Reconstructing Justice, Franklin Strier doesn't simply describe problems with the American trial system; he proposes reforms. Arguing that lawyers need to share more power with the judge and jury, Strier recommends ways we can retain and improve our basic adversarial system. He suggests we eliminate peremptory challenges, give judges the authority to ask questions of witnesses, and limit the number of expert witnesses. Drawing from a wide variety of sources, including case histories, scholarly works, Blackstone's Commentaries, and The Federalist Papers, he argues that judicial reform is not only possible, but—because of the increased public coverage of trials and understanding of the need for reform—inevitable.

Franklin Strier brings this critical look at trial reform up to date with a new preface in which he discusses how the inordinate amount of public attention of the O. J. Simpson trial, and the power the attorneys had over the court in that case, shed new light on the trial system's weaknesses and inequities.

"Anyone with an interest in courtroom trials will be fascinated by Strier's analysis of the game of law and suggestions for reforming the trail system to provide justice in a greater number of cases. . . . Highly recommended."—Choice
TABLE OF CONTENTS