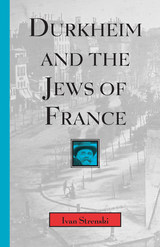 Ivan Strenski debunks the common notion that there is anything "essentially" Jewish in Durkheim's work. Seeking the Durkheim inside the real world of Jews in France rather than the imagined Jewishness inside Durkheim himself, Strenski adopts a Durkheimian approach to understanding Durkheim's thought. In so doing he shows for the first time that Durkheim's sociology (especially his sociology of religion) took form in relation to the Jewish intellectual life of late nineteenth- and early twentieth-century France.

Strenski begins each chapter by weighing particular claims (some anti-Semitic, some not) for the Jewishness of Durkheim's work. In each case Strenski overturns the claim while showing that it can nonetheless open up a fruitful inquiry into the relation of Durkheim to French Jewry. For example, Strenski shows that Durkheim's celebration of ritual had no innately Jewish source but derived crucially from work on Hinduism by the Jewish Indologist Sylvain Lévi, whose influence on Durkheim and his followers has never before been acknowledged.
AUTHOR BIOGRAPHY
Ivan Strenski is the Holstein Family Community Professor of Religious Studies at the University of California, Riverside. He is the author of Four Theories of Myth in Twentieth Century History and Religion in Relation: Method, Application, and Moral Location.
TABLE OF CONTENTS


Acknowledgments
1: Essential Jewishness Or Real Jews?
2: Why Society? French Nationalism and the Body of Judaism
3: Reinach's Modernism, Durkheim's Symbolism, and the Birth of the Sacred
4: How Durkheim Read the Talmud
5: Sylvain Levi: Mauss's "Second Uncle"
6: Where Do We Stand?
Notes
Index