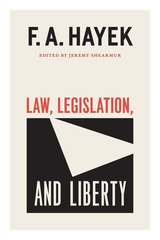 A new edition of F. A. Hayek’s three-part opus Law, Legislation, and Liberty, collated in a single volume
In this critical entry in the University of Chicago’s Collected Works of F. A. Hayek series, political philosopher Jeremy Shearmur collates Hayek’s three-part study of law and liberty and places Hayek’s writings in careful historical context. Incisive and unrestrained, Law, Legislation, and Liberty is Hayek at his late-life best, making it essential reading for understanding the philosopher’s politics and worldview.

These three volumes constitute a scaling up of the framework offered in Hayek’s famed The Road to Serfdom. Volume 1, Rules and Order, espouses the virtues of classical liberalism; Volume 2, The Mirage of Social Justice, examines the societal forces that undermine liberalism and, with it, liberalism’s capacity to induce “spontaneous order”; and Volume 3, The Political Order of a Free People, proposes alternatives and interventions against emerging anti-liberal movements, including a rule of law that resides in stasis with personal freedom.

Shearmur’s treatment of this challenging work—including an immersive new introduction, a conversion of Hayek’s copious endnotes to footnotes, corrections to Hayek’s references and quotations, and the provision of translations to material that Hayek cited only in languages other than English—lends it new importance and accessibility. Rendered anew for the next generations of scholars, this revision of Hayek’s Law, Legislation, and Liberty is sure to become the standard.
AUTHOR BIOGRAPHY
F. A. Hayek (1899–1992), recipient of the Presidential Medal of Freedom in 1991 and co-winner of the Nobel Prize in Economics in 1974, was a pioneer in monetary theory and a leading proponent of classical liberalism in the twentieth century. He taught at the University of London, the University of Chicago, and the University of Freiburg. Jeremy Shearmur is a fellow emeritus in philosophy at the Australian National University. His published books include The Political Thought of Karl Popper and Hayek and After: Hayekian Liberalism as a Research Programme, among others.
TABLE OF CONTENTS

Consolidated Preface to the One-Volume Edition

1          Reason and Evolution
Construction and evolution
The tenets of Cartesian rationalism
The permanent limitations of our factual knowledge
Factual knowledge and science
The concurrent evolution of mind and society: the role of rules
The false dichotomy of ‘natural’ and ‘artificial’
The rise of the evolutionary approach
The persistence of constructivism in current thought
Our anthropomorphic language
Reason and abstraction
Why the extreme forms of constructivist rationalism regularly lead to a revolt against reason
2          Cosmos and Taxis
The concept of order
The two sources of order
The distinguishing properties of spontaneous orders
Spontaneous orders in nature
In society, reliance on spontaneous order both extends and limits our powers of control
Spontaneous orders result from their elements obeying certain rules of conduct
The spontaneous order of society is made up of individuals and organizations
The rules of spontaneous order and the rules of organization
The terms ‘organism’ and ‘organization’
3          Principles and Expediency
Individual aims and collective benefits
Freedom can be preserved only by following principles and is destroyed by following expediency
The ‘necessities’ of policy are generally the consequences of earlier measures
The danger of attaching greater importance to the predictable rather than to the merely possible consequences of our actions
Spurious realism and the courage required to consider utopia
The role of the lawyer in political evolution
The modern development of law has been guided largely by false economics
4          The Changing Concept of Law
Law is older than legislation
The lessons of ethology and cultural anthropology
The process of articulation of practices
Factual and normative rules
Early law
The classical and the medieval tradition
The distinctive attributes of law arising from custom and precedent
Why grown law requires correction by legislation
The origin of legislative bodies
Allegiance and sovereignty
5          Nomos: The Law of Liberty
The functions of the judge
How the task of the judge differs from that of the head of an organization
The aim of jurisdiction is the maintenance of an ongoing order of actions
‘Actions towards others’ and the protection of expectations
In a dynamic order of actions only some expectations can be protected
The maximal coincidence of expectations is achieved by the delimitation of protected domains
The general problem of the effects of values on facts
The ‘purpose’ of law
The articulation of the law and the predictability of judicial decisions
The function of the judge is confined to a spontaneous order
Conclusions
6          Thesis: The Law of Legislation
Legislation originates from the necessity of establishing rules of organization
Law and statute: the enforcement of law and the execution of commands
Legislation and the theory of the separation of powers
The governmental functions of representative assemblies
Private law and public law
Constitutional law
Financial legislation
Administrative law and the police power
The ‘measures’ of policy
The transformation of private law into public law by ‘social’ legislation
The mental bias of a legislature preoccupied with government

Volume 2    The Mirage of Social Justice

7          General Welfare and Particular Purposes
In a free society the general good consists principally in the facilitation of the pursuit of unknown individual purposes
The general interest and collective goods
Rules and ignorance
The significance of abstract rules as guides in a world in which most of the particulars are unknown
Will and opinion, ends and values, commands and rules and other terminological issues
Abstract rules operate as ultimate values because they serve unknown particular ends
The constructivist fallacy of utilitarianism
All valid criticism or improvement of rules of conduct must proceed within a given system of such rules
‘Generalization’ and the test of universalizability
To perform their functions rules must be applied through the long run
8          The Quest for Justice
Justice is an attribute of human conduct
Justice and the law
Rules of just conduct are generally prohibitions of unjust conduct
Not only the rules of just conduct, but also the test of their justice, are negative
The significance of the negative character of the test of injustice
The ideology of legal positivism
The ‘pure theory of law’
Law and morals
The ‘law of nature’
Law and sovereignty
9          ‘Social’ or Distributive Justice
The concept of ‘social justice’
The conquest of public imagination by ‘social justice’
The inapplicability of the concept of justice to the results of a spontaneous process
The rationale of the economic game in which only the conduct of the players but not the result can be just
The alleged necessity of a belief in the justice of rewards
There is no ‘value to society’
The meaning of ‘social’
‘Social justice’ and equality
‘Equality of opportunity’
‘Social justice’ and freedom under the law
The spatial range of ‘social justice’
Claims for compensation for distasteful jobs
The resentment of the loss of accustomed positions
Conclusions
Appendix to Chapter Nine           Justice and Individual Rights
10        The Market Order or Catallaxy
The nature of the market order
A free society is a pluralistic society without a common hierarchy of particular ends
Though not a single economy, the Great Society is still held together mainly by what are vulgarly called economic relations
The aim of policy in a society of free men cannot be a maximum of foreknown results but only an abstract order
The game of catallaxy
In judging the adaptations to changed circumstances comparisons of the new with the former position are irrelevant
Rules of just conduct protect only material domains and not market values
The correspondence of expectations is brought about by a disappointment of some expectations
Abstract rules of just conduct can determine only chances and not particular results
Specific commands (‘interference’) in a catallaxy create disorder and can never be just
The aim of law should be to improve equally the chances of all
The Good Society is one in which the chances of anyone selected at random are likely to be as great as possible
11        The Discipline of Abstract Rules and the Emotions of the Tribal Society
The pursuit of unattainable goals may prevent the achievement of the possible
The causes of the revival of the organizational thinking of the tribe
The immoral consequences of morally inspired efforts
In the Great Society ‘social justice’ becomes a disruptive force
From the care of the most unfortunate to the protection of vested interests
Attempts to ‘correct’ the order of the market lead to its destruction
The revolt against the discipline of abstract rules
The morals of the open and of the closed society
The old conflict between loyalty and justice
The small group in the Open Society
The importance of voluntary associations

Volume 3    The Political Order of a Free People

12        Majority Opinion and Contemporary Democracy
The progressive disillusionment about democracy
Unlimited power the fatal defect of the prevailing form of democracy
The true content of the democratic ideal
The weakness of an elective assembly with unlimited powers
Coalitions of organized interests and the apparatus of para-government
Agreement on general rules and on particular measures
13        The Division of Democratic Powers
The loss of the original conception of the functions of a legislature
Existing representative institutions have been shaped by the needs of government, not of legislation
Bodies with powers of specific direction are unsuited for law-making
The character of existing ‘legislatures’ determined by their governmental tasks
Party legislation leads to the decay of democratic society
The constructivistic superstition of sovereignty
The requisite division of the powers of representative assemblies
Democracy or demarchy?
14        The Public Sector and the Private Sector
The double task of government
Collective goods
The delimitation of the public sector
The independent sector
Taxation and the size of the public sector
Security
Government monopoly of services
Information and education
Other critical issues
15        Government Policy and the Market
The advantages of competition do not depend on it being ‘perfect’
Competition as a discovery procedure
If the factual requirements of ‘perfect’ competition are absent, it is not possible to make firms act ‘as if’ it existed
The achievements of the free market
Competition and rationality
Size, concentration and power
The political aspects of economic power
When monopoly becomes harmful
The problem of anti-monopoly legislation
Not individual but group selfishness is the chief threat
The consequences of a political determination of the incomes of the different groups
Organizable and non-organizable interests
16        The Miscarriage of the Democratic Ideal: A Recapitulation
The miscarriage of the democratic ideal
A ‘bargaining’ democracy
The playball of group interests
Laws versus directions
Laws and arbitrary government
From unequal treatment to arbitrariness
Separation of powers to prevent unlimited government
17        A Model Constitution
The wrong turn taken by the development of representative institutions
The value of a model of an ideal constitution
The basic principles
The two representative bodies with distinctive functions
Further observations on representation by age groups
The governmental assembly
The constitutional court
The general structure of authority
Emergency powers
The division of financial powers
18        The Containment of Power and the Dethronement of Politics
Limited and unlimited power
Peace, freedom and justice: the three great negatives
Centralization and decentralization
The rule of the majority versus the rule of laws approved by the majority
Moral confusion and the decay of language
Democratic procedure and egalitarian objectives
‘State’ and ‘society’
A game according to rules can never know justice of treatment
The para-government of organized interests and the hypertrophy of government
Unlimited democracy and centralization
The devolution of internal policy to local government
The abolition of the government monopoly of services
The dethronement of politics
Epilogue: The Three Sources of Human Values
The errors of sociobiology
The process of cultural evolution
The evolution of self-maintaining complex systems
The stratification of rules of conduct
Customary rules and economic order
The discipline of freedom
The re-emergence of suppressed primordial instincts
Evolution, tradition and progress
The construction of new morals to serve old instincts: Marx
The destruction of indispensable values by scientific error: Freud
The tables turned
Author Index
Subject Index