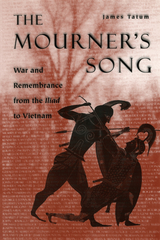 No matter when or where they are fought, all wars have one thing in common: a relentless progression to monuments and memorials for the dead. Likewise all art made from war begins and ends in mourning and remembrance. In The Mourner's Song, James Tatum offers incisive discussions of physical and literary memorials constructed in the wake of war, from the Vietnam Veterans Memorial to the writings of Stephen Crane, Edmund Wilson, Tim O'Brien, and Robert Lowell.

Tatum's touchstone throughout is the Iliad, not just one of the earliest war poems, but also one of the most powerful examples of the way poetry can be a tribute to and consolation for what is lost in war. Reading the Iliad alongside later works inspired by war, Tatum reveals how the forms and processes of art convert mourning to memorial. He examines the role of remembrance and the distance from war it requires; the significance of landscape in memorialization; the artifacts of war that fire the imagination; the intimate relationship between war and love and its effects on the ferocity with which soldiers wage battle; and finally, the idea of memorialization itself. Because all survivors suffer the losses of war, Tatum's is a story of both victims and victors, commanders and soldiers, women and men. Photographs of war memorials in Vietnam, France, and the United States beautifully augment his testimonials.

Eloquent and deeply moving, The Mourner's Song will speak to anyone interested in the literature of war and the relevance of the classics to our most pressing contemporary needs.
AUTHOR BIOGRAPHY
James Tatum is the Aaron Lawrence Professor of Classics at Dartmouth College. He is the author of several books, most recently Xenophon's Imperial Fiction: On the Education of Cyrus, and the editor of The Search for the Ancient Novel.
TABLE OF CONTENTS