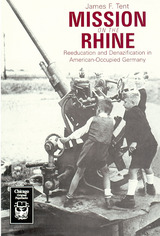 German society underwent greater change under the four years of military occupation than it had under Hitler and the Nazis. The issue of reeducation lay at the heart of America's occupation policies. Encompassing denazification, restructuring of the school system, university reform, and cultural exchange, reeducation began as an idealistic (and naive) attempt to democratize Germany by making her over in the American image.

For this meticulously researched study, James F. Tent has drawn on a wealth of recently declassified documents and on numerous personal interviews with veterans of the Occupation. He brings to life not only the dilemmas American officials faced in balancing the need for a political purge against the need to rehabilitate a disrupted society but also the paradoxes involved in a democracy's attempt to impose its ideals on another people. His book chronicles the dedicated work of many Americans; it also illuminates America's Occupation experience as a whole.
TABLE OF CONTENTS


Preface
Glossary
Chronology
Introduction
1. Planning for Reeducation
2. First Operations in Germany
3. A Second Purge
4. Kulturkampf in Bavaria
5. Around the Zone
6. From Reeducation to Reorientation
Conclusion
A Note on the Sources
Notes
Index