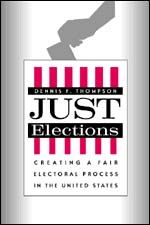 The 2000 election showed that the mechanics of voting such as ballot design, can make a critical difference in the accuracy and fairness of our elections. But as Dennis F. Thompson shows, even more fundamental issues must be addressed to insure that our electoral system is just.

Thompson argues that three central democratic principles—equal respect, free choice, and popular sovereignty—underlie our electoral institutions, and should inform any assessment of the justice of elections. Although we may all endorse these principles in theory, Thompson shows that in practice we disagree about their meaning and application. He shows how they create conflicts among basic values across a broad spectrum of electoral controversies, from disagreements about term limits and primaries to disputes about recounts and presidential electors.

To create a fair electoral system, Thompson argues, we must deliberate together about these principles and take greater control of the procedures that govern our elections. He demonstrates how applying the principles of justice to electoral practices can help us answer questions that our electoral system poses: Should race count in redistricting? Should the media call elections before the polls close? How should we limit the power of money in elections?

Accessible and wide ranging, Just Elections masterfully weaves together the philosophical, legal, and political aspects of the electoral process. Anyone who wants to understand the deeper issues at stake in American elections and the consequences that follow them will need to read it.

In answering these and other questions, Thompson examines the arguments that citizens and their representatives actually use in political forums, congressional debates and hearings, state legislative proceedings, and meetings of commissions and local councils. In addition, the book draws on a broad range of literature: democratic theory, including writings by Madison, Hamilton, and Tocqueville, and contemporary philosophers, as well as recent studies in political science, and work in election law.
AUTHOR BIOGRAPHY
Dennis F. Thompson is the Alfred North Whitehead Professor of Political Philosophy and director of the Center for Ethics and the Professions at Harvard University. He is the author of Political Ethics and Public Office, Ethics in Congress, and (with Amy Gutmann) Democracy and Disagreement.
TABLE OF CONTENTS