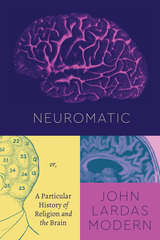 In Neuromatic, religious studies scholar John Lardas Modern offers a sprawling and critical examination of the history of the cognitive revolution and current attempts to locate all that is human in the brain, including spirituality itself. Neuromatic is a wildly original take on the entangled histories of science and religion that lie behind our brain-laden present: from eighteenth-century revivals to the origins of neurology and mystic visions of mental piety in the nineteenth century; from cyberneticians, Scientologists, and parapsychologists in the twentieth century, to contemporary claims to have discovered the neural correlates of religion.

What Modern reveals via this grand tour is that our ostensibly secular turn to the brain is bound up at every turn with the religion it discounts, ignores, or actively dismisses. In foregrounding the myths, ritual schemes, and cosmic concerns that have accompanied idealizations of neural networks and inquiries into their structure, Neuromatic takes the reader on a dazzling and disturbing ride through the history of our strange subservience to the brain.
AUTHOR BIOGRAPHY
John Lardas Modern is professor of religious studies at Franklin & Marshall College. He is the author of The Bop Apocalypse: The Religious Visions of Kerouac, Ginsberg, and Burroughs and Secularism in Antebellum America, the latter also published by the University of Chicago Press.
TABLE OF CONTENTS


Prologue: Already Gone
Introduction
Saturation
Approaching the Neuromatic (with a Short Engineering Aside)
Blurred Lines
Cybernetics and the Question of Religion
Cybernetic Theses of Secularization
Poetics

Synaptic Gap: The Information of History

II. Neither Matter nor Spirit: Toward a Genealogy of Information
Hard Problems
Neuromatic Piety: An Overview
Ether and the Permeation of the Interspaces
Emanuel Swedenborg, Neuroscientist
Ghosts of Swedenborg
Mental Slavery and the Invention of Spirituality
The Diakka and Their Earthly Victims
The Mediomaniacal Origins of American Neurology
Prehistories of Electroencephalography
Brain Waves and Tremulating Information
Biofeedback and the Experience of Correspondence
The Ontology of Information
Concluding Thoughts on Perceptronium

Synaptic Gap: Too Much Too Soon

III. Imagining the Neuromatic
Crash and Burn
Opening Scene from a Cybernetic Demimonde
Elective Affinities
The Mechanics of Mediumship
Images of an Oracle
Thought Dictated in the Absence of All Control
Cut-Ups
From Voodoo Death to Virology
Engrams and Auditing
Past Lives of the Neuromatic Brain
Exteriorization
Break Through in Grey Room

IV. Histories of Electric Shock Therapy circa 1978
Of Systems, Sex, and Secular Conversion
Moral Treatment and Heads That Differ in Shape
Gendered Electricity in the Neuromatic Groove
The Operationalization of Napa State Insane Asylum
Patients’ Rights
The Shaving of Leonard Frank’s Beard
Electric Love Therapy
The Business of Marriage
The Union of All Contradictory Ideas
I Watch TV, I Watch TV
Live from Napa State