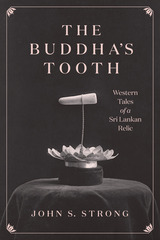 Bodily relics such as hairs, teeth, fingernails, pieces of bone—supposedly from the Buddha himself—have long served as objects of veneration for many Buddhists. Unsurprisingly, when Western colonial powers subjugated populations in South Asia, they used, manipulated, redefined, and even destroyed these objects in an effort to exert control.

In The Buddha's Tooth, John S. Strong examines Western stories, from the sixteenth to the twentieth century, surrounding two significant Sri Lankan sacred objects, in order to illuminate and concretize colonial attitude towards Asian religions. First, he analyzes a tale about the Portuguese capture of a tooth identified as a relic of the Buddha in the mid-sixteenth century and its subsequent public destruction in Goa. Second, he switches gears to look at the nineteenth century saga of British dealings with another tooth relic of the Buddha—the famous Daḷadā enshrined in a temple in Kandy—from 1815 when it was taken over by English forces to 1954 when it was visited by Queen Elizabeth II. As Strong reveals, the stories of both the Portuguese Tooth and the Kandyan Tooth reflect nascent and developing Western understandings of Buddhism, realizations of the cosmopolitan nature of the tooth, and tensions between secular and religious interests.
AUTHOR BIOGRAPHY
John S. Strong is the Charles A. Dana Emeritus Professor of Religious Studies at Bates College. He is the author of several books, including Relics of the Buddha and Buddhisms: An Introduction.
TABLE OF CONTENTS


Preface and Acknowledgments
Note on Usage
Introduction
Part I : The Portuguese and the Tooth Relic
One / The Tale of the Portuguese Tooth and Its Sources
Two / Where the Tooth Was Found: Traditions about the Location of the Relic in Sri Lanka
Three / Whose Tooth Was It? Traditions about the Identity of the Relic
Four / The Trial of the Tooth
Five / The Destruction of the Tooth
Conspectus of Part One / The Storical Evolution of the Tales of the Portuguese Tooth
Part II : The British and the Tooth Relic
Six / The Cosmopolitan Tooth: The Relic in Kandy before the British Became Aware of It
Seven / The British Takeover of 1815 and the Kandyan Convention
Eight / The Relic Returns: The Tooth and Its Properties Restored to the Temple
Nine / The Relic Lost and Recaptured: The Tooth and the Rebellion of 1817–1818
Ten / The Relic Disestablished: Missionary Oppositions to the Tooth
Eleven / Showings of the Tooth: The Story of the King of Siam’s Visit (1897)
Twelve / Showings of the Tooth: The Story of Queen Elizabeth’s Shoes (1954)
Summary and Conclusion
References
Index