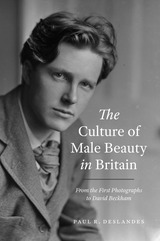 A heavily illustrated history of two centuries of male beauty in British culture.

Spanning the decades from the rise of photography to the age of the selfie, this book traces the complex visual and consumer cultures that shaped masculine beauty in Britain, examining the realms of advertising, health, pornography, psychology, sport, and celebrity culture. Paul R. Deslandes chronicles the shifting standards of male beauty in British culture—from the rising cult of the athlete to changing views on hairlessness—while connecting discussions of youth, fitness, and beauty to growing concerns about race, empire, and degeneracy. From earlier beauty show contestants and youth-obsessed artists, the book moves through the decades into considerations of disfigured soldiers, physique models, body-conscious gay men, and celebrities such as David Beckham and David Gandy who populate the worlds of television and social media.

Deslandes calls on historians to take beauty and gendered aesthetics seriously while recasting how we think about the place of physical appearance in historical study, the intersection of different forms of high and popular culture, and what has been at stake for men in “looking good.”
AUTHOR BIOGRAPHY
Paul R. Deslandes is professor and chair of the Department of History at the University of Vermont and is the author of Oxbridge Men: British Masculinity and the Undergraduate Experience, 1850-1920. He lives in Shelburne, Vermont.

Part One Setting the Stage: The Foundations of Modern Male Beauty