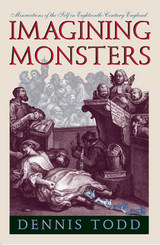 In 1726, an illiterate woman from Surrey named Mary Toft announced that she had given birth to seventeen rabbits. Deceiving respected physicians and citizens alike, she created a hoax that held England spellbound for months. In Imagining Monsters, Dennis Todd tells the story of this bizarre incident and shows how it illuminates eighteenth-century beliefs about the power of imagination and the problems of personal identity.

Mary Toft's outrageous claim was accepted because of a common belief that the imagination of a pregnant woman could deform her fetus, creating a monster within her. Drawing on largely unexamined material from medicine, embryology, philosophy, and popular "monster" exhibitions, Todd shows that such ideas about monstrous births expressed a fear central to scientific, literary, and philosophical thinking: that the imagination could transgress the barrier between mind and body.

In his analysis of the Toft case, Todd exposes deep anxieties about the threat this transgressive imagination posed to the idea of the self as stable, coherent, and autonomous. Major works of Pope and Swift reveal that they, too, were concerned with these issues, and Imagining Monsters provides detailed discussions of Gulliver's Travels and The Dunciad illustrating how these writers used images of monstrosity to explore the problematic nature of human identity. It also includes a provocative analysis of Pope's later work that takes into account his physical deformity and his need to defend himself in a society that linked a deformed body with a deformed character.
TABLE OF CONTENTS


List of Illustrations
Acknowledgments
Note
1. A New Whim Wham from Guildford
2. Doctors in Labor
3. Enthusiasm Delineated
4. We Beg Leave to Assure You That We Are, &c.
5. A Lump of Deformity
6. The Mighty Mother, and Her Son
7. What the Body Says
Notes
Index