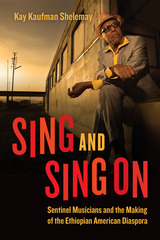 Sing and Sing On is the first study of the forced migration of musicians out of the Horn of Africa dating from the 1974 Ethiopian revolution, a political event that overthrew one of the world’s oldest monarchies and installed a brutal military regime. Musicians were among the first to depart the region, their lives shattered by revolutionary violence, curfews, and civil war. Reconstructing the memories of forced migration, Sing and Sing On traces the challenges musicians faced amidst revolutionary violence and the critical role they played in building communities abroad.

Drawing on the recollections of dozens of musicians, Sing and Sing On details personal, cultural, and economic hardships experienced by musicians who have resettled in new locales abroad. Kay Kaufman Shelemay highlights their many artistic and social initiatives and the ways they have offered inspiration and leadership within and beyond a rapidly growing Ethiopian American diaspora. While musicians held this role as sentinels in Ethiopian culture long before the revolution began, it has taken on new meanings and contours in the Ethiopian diaspora. The book details the ongoing creativity of these musicians while exploring the attraction of return to their Ethiopian homeland over the course of decades abroad. Ultimately, Shelemay shows that musicians are uniquely positioned to serve this sentinel role as both guardians and challengers of cultural heritage.
AUTHOR BIOGRAPHY
Kay Kaufman Shelemay is the G. Gordon Watts Professor of Music and African American studies at Harvard University. She is the author or editor of many books, including Soundscapes: Exploring Music in a Changing World and Let Jasmine Rain Down: Song and Remembrance among Syrian Jews, also published by the University of Chicago Press.