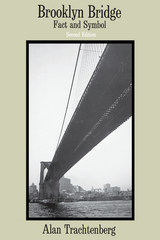 "[Brooklyn Bridge] is familiar in so many movies, in so many stage sets and, as Mr. Trachtenberg shows in this brilliant . . . book, it is at least as much a symbol as a reality. . . . Mr. Trachtenberg is always exciting and illuminating."—Times Literary Supplement

"The book is a skillful and insightful synthesis of materials about Brooklyn Bridge from such diverse fields as history, engineering, literature and art. Essentially it asks the question of why Brooklyn Bridge achieved such great impact on the nineteenth century American imagination and why it has continued to have a significant impact on twentieth century art and literature. In addition to its exploration of the bridge's symbolic significance, which includes perceptive analyses of such particular works as Hart Crane's great poem cycle and the paintings of artists like Joseph Stella, the book also includes a solidly researched account of the conception, planning and construction of the bridge. Trachtenberg's account of the intellectual and cultural sources of the bridge is particularly fascinating in its demonstration of the convergence of many different philosophical and ideological currents of the time around this great engineering enterprise, illustrating as effectively as any discussion I know the complex interplay of ideas and material culture."—John G. Cawelti, University of Chicago

"Alan Trachtenberg's Brooklyn Bridge is a fascinating story, the philosophic genesis of the idea in Europe, John Roebling's heroic effort to translate it into masonry and steel, and the meanings that Americans attached to the physical object as an emblem of their aspirations."—Leo Marx, Amherst College, author of The Machine in the Garden
AUTHOR BIOGRAPHY
Alan Trachtenberg is professor of American studies and English at Yale University.
TABLE OF CONTENTS