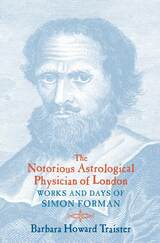 Quack, conjurer, sex fiend, murderer—Simon Forman has been called all these things, and worse, ever since he was implicated (two years after his death) in the Overbury poisoning scandal that rocked the court of King James. But as Barbara Traister shows in this fascinating book, Forman's own unpublished manuscripts—considered here in their entirety for the first time—paint a quite different picture of the works and days of this notorious astrological physician of London.

Although he received no formal medical education, Forman built a thriving practice. His success rankled the College of Physicians of London, who hounded Forman with fines and jail terms for nearly two decades. In addition to detailing case histories of his medical practice—the first such records known from London—as well as his run-ins with the College, Forman's manuscripts cover a wide variety of other matters, from astrology and alchemy to gardening and the theater. His autobiographical writings are among the earliest English examples of their genre and display an abiding passion for reworking his personal history in the best possible light, even though they show little evidence that Forman ever intended to publish them.

Fantastic as many of Forman's manuscripts are, it is their more mundane aspects that make them such a priceless record of what daily life was like for ordinary inhabitants of Shakespeare's London. Forman's descriptions of the stench of a privy, the paralyzed limbs of a child, a lost bitch dog with a velvet collar all offer tantalizing glimpses of a world that seems at once very far away and intimately familiar. Anyone who wants to reclaim that world will enjoy this book.
AUTHOR BIOGRAPHY
Barbara Howard Traister is a professor of English at Lehigh University. She is the author of Heavenly Necromancers: The Magician in Early Renaissance Drama.
TABLE OF CONTENTS