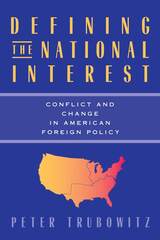 The United States has been marked by a highly politicized and divisive history of foreign policy-making. Why do the nation's leaders find it so difficult to define the national interest?

Peter Trubowitz offers a new and compelling conception of American foreign policy and the domestic geopolitical forces that shape and animate it. Foreign policy conflict, he argues, is grounded in America's regional diversity. The uneven nature of America's integration into the world economy has made regionalism a potent force shaping fights over the national interest. As Trubowitz shows, politicians from different parts of the country have consistently sought to equate their region's interests with that of the nation. Domestic conflict over how to define the "national interest" is the result. Challenging dominant accounts of American foreign policy-making, Defining the National Interest exemplifies how interdisciplinary scholarship can yield a deeper understanding of the connections between domestic and international change in an era of globalization.
AUTHOR BIOGRAPHY
Peter Trubowitz is associate professor of government at the University of Texas, Austin.
TABLE OF CONTENTS


List of Tables
List of Figures
Preface
Chapter One: Regional Conflict and Coalitions in the Making of American Foreign Policy
Chapter Two: Sectional Conflict and the Great Debates of the 1890s
Chapter Three: North-South Alliance and the Triumph of Internationalism in the 1930s
Chapter Four: The Rise of the Sunbelt: America Resurgent in the 1980s
Chapter Five: Geopolitics and Foreign Policy
Notes
Bibliography
Index