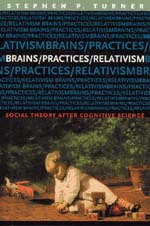 Brains/Practices/Relativism presents the first major rethinking of social theory in light of cognitive science. Stephen P. Turner focuses especially on connectionism, which views learning as a process of adaptation to input that, in turn, leads to patterns of response distinct to each individual. This means that there is no common "server" from which people download shared frameworks that enable them to cooperate or communicate. Therefore, argues Turner, "practices"—in the sense that the term is widely used in the social sciences and humanities—is a myth, and so are the "cultures" that are central to anthropological and sociological thought.

In a series of tightly argued essays, Turner traces out the implications that discarding the notion of shared frameworks has for relativism, social constructionism, normativity, and a number of other concepts. He suggests ways in which these ideas might be reformulated more productively, in part through extended critiques of the work of scholars such as Ian Hacking, Andrew Pickering, Pierre Bourdieu, Quentin Skinner, Robert Brandom, Clifford Geertz, and Edward Shils.
AUTHOR BIOGRAPHY
Stephen P. Turner is a graduate research professor and chair of the Department of Philosophy at the University of South Florida. He is the author or coeditor of a number of books, including The Social Theory of Practices, published by the University of Chicago Press, and The Cambridge Companion to Weber.
TABLE OF CONTENTS


Acknowledgments
Introduction: Social Theory After Cognitive Science
1. Throwing Out the Tacit Rule Book: Learning and Practices
2. Searle's Social Reality
3. Imitation or the Internalization of Norms: Is Twentieth-Century Social Theory Based on the Wrong Choice?
4. Relativism as Explanation
5. The Limits of Social Constructionism
6. Making Normative Soup Out of Nonnormative Bones
7. Teaching Subtlety of Thought: The Lessons of "Contextualism"
8. Practice in Real Time
9. The Significance of Shils
References
Index