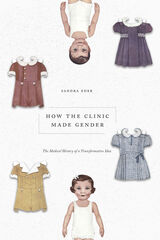 An eye-opening exploration of the medical origins of gender in modern US history.

Today, a world without “gender” is hard to imagine. Gender is at the center of contentious political and social debates, shapes policy decisions, and informs our everyday lives. Its formulation, however, is lesser known: Gender was first used in clinical practice. This book tells the story of the invention of gender in American medicine, detailing how it was shaped by mid-twentieth-century American notions of culture, personality, and social engineering.

Sandra Eder shows how the concept of gender transformed from a pragmatic tool in the sex assignment of children with intersex traits in the 1950s to an essential category in clinics for transgender individuals in the 1960s. Following gender outside the clinic, she reconstructs the variable ways feminists integrated gender into their theories and practices in the 1970s. The process by which ideas about gender became medicalized, enforced, and popularized was messy, and the route by which gender came to be understood and applied through the treatment of patients with intersex traits was fraught and contested. In historicizing the emergence of the sex/gender binary, Eder reveals the role of medical practice in developing a transformative idea and the interdependence between practice and wider social norms that inform the attitudes of physicians and researchers. She shows that ideas like gender can take on a life of their own and may be used to question the normative perceptions they were based on. Illuminating and deeply researched, the book closes a notable gap in the history of gender and will inspire current debates on the relationship between social norms and medical practice.
AUTHOR BIOGRAPHY
Sandra Eder is assistant professor in the Department of History at the University of California, Berkeley. She is the coeditor of Pink and Blue: Gender, Culture, and the Health of Children.
TABLE OF CONTENTS


Introduction
Chapter 1: Sex before Gender: From Determining True Sex to Finding the Better Sex
Robert: Hope
Chapter 2: Happy and Well Adjusted: The Psychologization of Sex in the 1930s and 1940s
Karen: Coming of Age
Chapter 3: Culture, Gender, and Personality
Chapter 4: Making Boys and Girls: Gender at Johns Hopkins
Chapter 5: Gender in the Clinic: The Process of Normalization
Chapter 6: The Circulations of Gender, Cortisone, and Intersex Case Management
Janet: Despair
Chapter 7: The Life of Gender: Reformulations and Adaptations
Epilogue