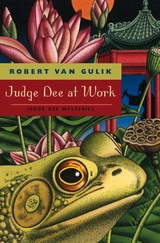 The eight short stories in Judge Dee at Work cover a decade during which the judge served in four different provinces of the T’ang Empire. From the suspected treason of a general in the Chinese army to the murder of a lonely poet in his garden pavilion, the cases here are among the most memorable in the Judge Dee series.
AUTHOR BIOGRAPHY
Robert van Gulik (1910–67) was a Dutch diplomat and an authority on Chinese history and culture. His many works include sixteen Judge Dee mysteries, a study of the gibbon in China, and two books on the Chinese lute.
REVIEWS
“Judge Dee belongs in that select group of fictional detectives headed by the renowned Sherlock Holmes. I assure you it is a compliment not given frivolously.”
— Robert Kirsch, Los Angeles Times


1. Five Auspicious Clouds
2. The Red Tape Murder
3. He Came with the Rain
4. The Murder on the Lotus Pond
5. The Two Beggars
6. The Wrong Sword
7. The Coffins of the Emperor
8. Murder on New Year's Eve
Colophon
Judge Dee Chronology