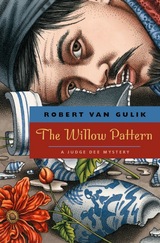 Judge Dee has been appointed emergency governor of the plague- and drought-ridden Imperial City. As his guards help the city fend off a popular uprising, an aristocrat from one of the oldest families in China suffers an "accident" in a deserted mansion.

In The Willow Pattern, the illustrious judge uses his trademark expertise to unravel the mysteries of the nobleman, a shattered vase, and a dead bondmaid. Along the way he encounters a woman who fights with loaded sleeves, a nearly drowned courtesan, and an elaborate trap set for a murderer. Packed with suspense, violence, and romance, The Willow Pattern won’t disappoint Judge Dee’s legions of loyal fans.

Robert van Gulik (1910–67) was a Dutch diplomat and an authority on Chinese history and culture. His many works include sixteen Judge Dee mysteries, a study of the gibbon in China, and two books on the Chinese lute.


Illustrations
Judge Dee and Chiao Tai
A meeting in a dark street
A girl assaulted by four ruffians
Judge Dee receives Mrs. Mei
A lady kneels before the judge
Judge Dee has tea in the Willow Abode
Ma Joong saves a drowning girl
Judge Dee in the boudoir of a dead lady
Ma Joong and Chiao Tai view two bodies
Coral's dance
A cruel tyrant and his victim
Judge Dee in the guestroom of the Mei mansion
The judge questions a suspect
A man meets his dead mistress
A young girl takes vengeance