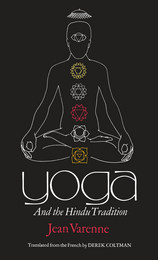 A popular and critical success when it first appeared in France, Yoga and the Hindu Tradition has freed Yoga from the common misconceptions of the recent Yoga vogue. Jean Varenne, the distinguished French Orientalist, presents the theory of classical Yoga, in all its richness, as a method—a concrete way to reach the Absolute through spiritual exercises—which makes possible the transition from existence to essence.

This excellent translation, including line drawings and charts, a glossary of technical terms, and a complete translation of the Yoga Darshana Upanishad, begins with a brief description of the metaphysical and religious history on which Yoga is based. Varenne discusses the theoretical conception of Yoga as the search for liberating knowledge, concluding with a brief indication of the physical practices and extra Yogic themes such as Kundalini and Tantrism. It is the author's hope that "those who read [this book] will come to realize that it is in fact dishonest to reduce Yoga to some sort of physical training, or to just an occult doctrine; it is a 'world view' a Weltanschauung that comprehends reality in its totality."

"The straightforward, well-organized presentation makes the book itself a microcosm of what Varenne singles out as a dominant feature of classical Hindu thought—a bringing of the complex and multitudinous into a unity."—Judith Guttman, Yoga Journal
TABLE OF CONTENTS