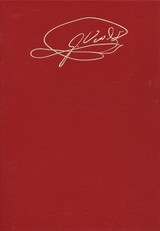 Rigoletto: Melodramma in Three Acts by Francesco Maria Piave
by Giuseppe Verdi
edited by Martin Chusid
University of Chicago Press, 1983
Cloth: 978-0-226-85306-2
The University of Chicago Press, in collaboration with Casa Ricordi of Milan, has undertaken to publish the first critical edition of the complete works of Giuseppe Verdi. The Works of Giuseppe Verdi, the only edition based exclusively on original sources and the only one to present authentic versions of all the composer's works, will include each of Verdi's twenty-eight operas (all versions), his sacred music, songs, chamber music, and juvenilia. The series begins with the definitive version of Rigoletto.