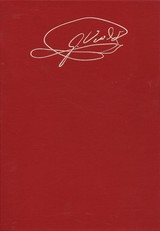 Verdi’s Attila, his ninth opera, had its premiere at Venice’s Teatro La Fenice in March 1846. Based on the German play Attila, King of the Huns, the libretto has its own storied history: as Verdi fell seriously ill before the work’s completion, the main librettist moved permanently to Madrid, leaving the last act of Attila only a sketch. It was then that Verdi called upon Francesco Maria Piave, the librettist for two of his earlier works, who at the composer’s behest scratched plans for a large choral finale and decided instead to concentrate on the dramatic roles of the protagonists.

In years since, Attila has become one of Verdi’s most popular and oft-staged early works. The composer's inimitable vitality, soaring arcs of melody, grand choruses, and passion are here amply apparent. This critical edition, based on Verdi’s autograph full score preserved at the British Library, restores the opera’s original text and accurately reflects the composer's colorful and elaborate musical setting, while Helen M. Greenwald’s masterful introduction discusses the opera’s origins, sources, and performance questions, and her critical commentary details editorial problems and their solutions.

Helen M. Greenwald is professor of musicology at the New England Conservatory in Boston. She has written numerous articles on vocal music from the eighteenth to the twentieth centuries and is editor of The Oxford Handbook of Opera.