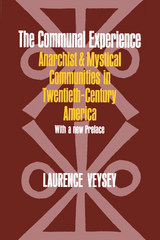 The Communal Experience: Anarchist and Mystical Communities in Twentieth Century America
by Laurence R. Veysey
University of Chicago Press, 1978
Paper: 978-0-226-85458-8
The original impulse for groups to separate from society and establish communities of their own was religious. Though the religious side of this drive toward separation remains strong, the last two centuries have seen the appearance of secular communities with a socialist or anarchist orientation. In The Communal Experience, nominated for a National Book Award in 1973, Laurence Veysey explores the close resemblances between the secular and religious forms of cultural radicalism through intensive observation of four little-known communities.

Veysey compares the history of secular communities such as the early Ferrer Colony and Modern School, of Shelton, New Jersey, with contemporary anarchist communities in New York, Vermont, and New Mexico. Religious communes—"Communities of Discipline"—such as the Vedanta monasteries of the early twentieth century are compared with contemporary mystical communities in New Mexico. Distinctions between the anarchist and the mystical groups are most obvious from their approach to communal life. As Veysey shows, anarchist communities are loose, unstructured, voluntaristic; the mystics establish more rigid life-styles, focus on spiritual leaders, and hold community a secondary goal to self-realization. In a new preface written for this Phoenix Edition, he describes his return to a New Mexican mystical community and the changes that have occurred in the six years since his last visit.
TABLE OF CONTENTS


Preface to the Phoenix Edition
Acknowledgments
Introduction
1. In Search of a Counter-Cultural Tradition
Part 1 - Anarchistic Communities
2. The Ferrer Colony and Modern School of Stelton, New Jersey
The Ferrer Center and the Immigrant Life of New York
Why Native Americans Joined the Ferrer Movement
Flight from the City
The Building of the Colony
The Educational Radicalism of Elizabeth and Alexis Ferm
Conflict Over Ideals
Decline and Disappearance
3. Contemporary Anarchistic Communes
New York
Vermont
New Mexico
Part II - Communities of Discipline
4. Vedanta Monasteries
The Vedanta Movement in America
Vedanta and Community
Encounters Between Swamis and American Seekers
The Limitations of the Monastic Impulse
5. New Mexico, 1971: Inside a "New Age" Social Order
The External Tour
Journal of a Five Weeks' Stay
History and Intellectual Sources
Individuals
The Strength of the Fledgling Culture
Ezra
The Old in the New
Seven Months Later
6. The Trend of American Cultural Radicalism
Index