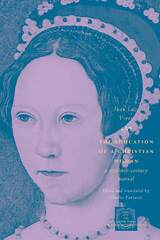 "From meetings and conversation with men, love affairs arise. In the midst of pleasures, banquets, dances, laughter, and self-indulgence, Venus and her son Cupid reign supreme. . . . Poor young girl, if you emerge from these encounters a captive prey! How much better it would have been to remain at home or to have broken a leg of the body rather than of the mind!" So wrote the sixteenth-century Spanish humanist Juan Luis Vives in a famous work dedicated to Henry VIII's daughter, Princess Mary, but intended for a wider audience interested in the education of women.

Praised by Erasmus and Thomas More, Vives advocated education for all women, regardless of social class and ability. From childhood through adolescence to marriage and widowhood, this manual offers practical advice as well as philosophical meditation and was recognized soon after publication in 1524 as the most authoritative pronouncement on the universal education of women. Arguing that women were intellectually equal if not superior to men, Vives stressed intellectual companionship in marriage over procreation, and moved beyond the private sphere to show how women's progress was essential for the good of society and state.
TABLE OF CONTENTS


Introduction to the Series
Acknowledgments
Key to Abbreviations
Introduction: Prelude to the Other Voice in Vives
A Note on the Text
Preface to the Books "The Education of a
Christian Woman"
Book I—Which Treats of Unmarried Young Women
I. On the Education of the Young Woman as a Child
II. On the Later Years of Childhood
III. On Her Early Training
IV. On the Instruction of Young Girls
V. Which Writers Are to Be Read and Which Not to Be Read
VI. On Virginity
VII. How the Young Woman Will Treat Her Body
VIII. On Adornment
IX. On the Solitude of the Virgin
X. On the Virtues of a Woman and the Examples She Should Imitate
XI. How She Will Behave in Public
XII. On Dancing
XIII. On Love Affairs
XIV. On the Love Befitting a Virgin
XV. On Seeking a Spouse
Book II—Which Treats of Married Women
I. What Thoughts Should Occupy the Mind of a Woman
When She Marries
II. Two Points of Greatest Importance for the Married Woman
III. How She Should Behave toward Her Husband
IV. On the Concord of Married Couples
V. How She Will Conduct Herself Privately with Her Husband
VI. On Jealousy
VII. On Adornments
VIII. On Behavior in Public
IX. How She Should Behave at Home
X. On Children and the Care That Must Be Taken of Them
XI. On the Twice-Married and Stepmothers
XII. How She Will Behave with Her Relatives and In-Laws
XIII. How She Is to Behave with Her Married Son or Daughter,
with Her Son-in-Law and Daughter-in-Law
XIV. On a Married Woman of Advanced Years
Book III—On Widows
I. On the Mourning of Widows
II. On the Husband’s Funeral
III. On the Memory of One’s Husband
IV. On the Chastity and the Moral Rectitude of a Widow
V. How They Should Conduct Themselves at Home
VI. How She Should Behave in Public
VII. On Second Marriages
Appendix
Index