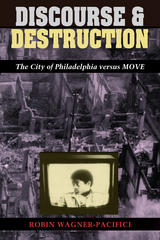 In the early 1980s the radical group MOVE settled into a rowhouse in a predominantly African-American neighborhood of west Philadelphia, beginning years of confrontations with neighbors and police over its anti-establishment ways and militant stance against all social and political institutions. On May 13, 1985, following a period of increased MOVE activity and threats by neighbors to take matters into their own hands, the city moved from bureaucratic involvement to violent intervention. Police bullhorned arrest warrants, hosed down the rowhouse, sprayed tear gas through its walls, and dropped explosives from a helicopter. By the end of the day, eleven MOVE members were dead, an entire block of the neighborhood was destroyed, and Mayor Wilson Goode was calling for an investigation.

How did this struggle between the city and MOVE go from memos and meetings to tear gas and bombs? And how does the mandate to defend public order become a destructive force? Sifting through the hearings that followed the deadly encounter, Robin Wagner-Pacifici reconstructs the conflict between MOVE and the city of Philadelphia. Against this richly nuanced account, in which the participants—from the mayor and the police officers to members of MOVE and their neighbors—offer opposing versions of their aims, assumptions, and strategies, Wagner-Pacifici develops a compelling analysis of the relation between definition and action, between language and violence.

Was MOVE simply a radical, black separatist group with an alternative way of life? Or was it a terrorist cult that held a neighborhood and politicians hostage to its offensive language and bizarre behavior? Wagner-Pacifici shows how competing definitions of MOVE led to different strategies for managing the conflict. In light of the shockingly similar, and even more deadly, 1993 Branch Davidian disaster in Waco, Texas, such an analysis becomes imperative. Indeed, for those who hope to understand—and, finally, to forestall—the moment when language and violence are inexorably drawn together, this book demands attention.
TABLE OF CONTENTS


Preface
Acknowledgments
1: A Framework for Articulating Horror
2: What Is MOVE?
3: The Language of Domesticity
4: Bureaucratic Discourse: The Policy, the Plan, the Operation
5: The Law and Its Apparatus: Speaking Warrants and Weapons
6: Decarcerating Discourse
Notes
Bibliography
Index