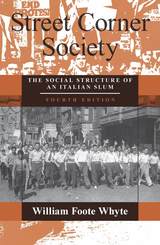 Street Corner Society is one of a handful of works that can justifiably be called classics of sociological research. William Foote Whyte's account of the Italian American slum he called "Cornerville"—Boston's North End—has been the model for urban ethnography for fifty years.

By mapping the intricate social worlds of street gangs and "corner boys," Whyte was among the first to demonstrate that a poor community need not be socially disorganized. His writing set a standard for vivid portrayals of real people in real situations. And his frank discussion of his methodology—participant observation—has served as an essential casebook in field research for generations of students and scholars.

This fiftieth anniversary edition includes a new preface and revisions to the methodological appendix. In a new section on the book's legacy, Whyte responds to recent challenges to the validity, interpretation, and uses of his data. "The Whyte Impact on the Underdog," the moving statement by a gang leader who became the author's first research assistant, is preserved.


List of Illustrations
Preface to the Fourth Edition
Introduction: Cornerville and Its People
Part I: Corner Boys and College Boys
I. Doc and His Boys
1. The Members of the Gang
2. Bowling and Social Ranking
3. The Nortons and the Aphrodite Club
4. Doc's Political Campaign
5. Disintegration
II. Chick and His Club
1. The Story of Chick Morelli
2. Organizing the Club
3. Social Activities
4. Opposition to Chick
5. The Second Season
6. Disintegration
7. Republican Politics
8. Chick Morelli's Career
III. Social Structure and Social Mobility
1. The Nature of the Groups
2. The Social Role of the Settlement House
3. Loyalty and Social Mobility
Part II. Racketeers and Politicians
IV. The Social Structure of Racketeering
1. History of the Rackets
2. Organization of the Policy Racket
3. Relations with the Police
4. The Racketeer in His Social Setting
V. The Racketeers in the Cornerville S. and A. Club
1. Tony Cataldo and the Shelby Street Boys
2. Organizing the Club
3. Reorganizing the Club
4. The Political Issue
5. The Crisis and Tony Cataldo
6. Tony's Beano Party
7. The New Administration
8. Carlo and Tony
VI. Politics and the Social Structure
1. The Changing Nature of Political Organization
2. The Political Career
3. Organizing the Campaign
4. Political Rallies
5. Election Day
6. The Nature of Political Obligations
Part III. Conclusion
1. The Gang and the Individual
2. The Social Structure
3. The Problem of Cornerville
Appendixes
Appendix A: On the Evolution of "Street Corner Society"
1. Personal Background
2. Finding Cornerville
3. Planning the Study
4. First Efforts
5. Beginning with Doc
6. Training in Participant Observation
7. Venture into Politics
8. Back on Norton Street
9. Replanning the Research
10. Again in the Corner Gang
11. Studying Racketeering
12. Marching on City Hall
13. Farewell to Cornerville
14. Cornerville Revisited
15. Getting Street Corner Society Accepted as a Doctoral Thesis
16. Revisiting Street Corner Society Fifty Years Later
Appendix B: The Whyte Impact on an Underdog by Angelo Ralph Orlandella
Appendix C: Selected References
Index