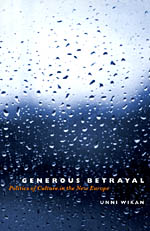 All over Western Europe, the lot of many non-Western immigrants is one of marginalization, discrimination, and increasing segregation. In this bold and controversial book, Unni Wikan shows how an excessive respect for "their culture" has been part of the problem. Culture has become a new concept of race, sustaining ethnic identity politics that subvert human rights—especially for women and children. Fearful of being considered racist, state agencies have sacrificed freedom and equality in the name of culture.

Comparing her native Norway to Western Europe and the United States, Wikan focuses on people caught in turmoil, how institutions function, and the ways in which public opinion is shaped and state policies determined. Contradictions arise between policies of respect for minority cultures, welfare, and freedom, but the goal is the same: to create a society committed to both social justice and respect for human rights.

Writing with power and grace, Wikan makes a plea for a renewed moral vitality and human empathy that can pave the way for more effective social policies and create change.
AUTHOR BIOGRAPHY
Unni Wikan is a professor in the Department of Social Anthropology at the University of Oslo. She is the author of numerous books, including Behind the Veil in Arabia; Managing Turbulent Hearts; and Tomorrow, God Willing-all published by the University of Chicago Press.
TABLE OF CONTENTS


Acknowledgments
Introduction: A Personal Odyssey
I. Welfare for Whom?
1. A Society Worth Living In
2. A Tale of Two Would-Be Survivors
3. A Modern Form of Sacrifice
II. The New Norway
4. Immigrants in Norway: Some Salient Facts
5. Dangerous Facts: What We Were Not Supposed to Know
6. Silence as Political Cover-Up
III. The Politics of Culture
7. Law versus Culture
8. Culture and Accountability
9. Culture—A New Concept of Race?
10. Cultures Don't Meet, People Do
IV. Gender and Identity Politics
11. Sara's Story: The Crime of Becoming Swedish
12. Anna and Others: Religion Is Not the Culprit
13. Noreen's Story: The Price of a Narrow Escape
V. The First Person Singular
14. A Fatal Difference in Grammar
15. "You Never Asked Me!"
16. Opportunity Lost: The Defeat of an Everyday Hero
17. Overcoming the Odds: Somali Women in Norway
VI. Tolerance versus Humanism
18. Generous Betrayal
19. The Politics of Fear
20. Civic Liberty and Liberal Democracy
VII. A Hope for the Future
21. Nadia's Case: A Crucial Step Forward
22. Welfare and Citizenship
23. Welfare and Social Justice
Postscript: Aisha and the Long Way to Freedom
Notes
References
Index