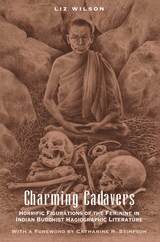 In this highly original study of sexuality, desire, the body, and women,
Liz Wilson investigates first-millennium Buddhist notions of
spirituality. She argues that despite the marginal role women played in
monastic life, they occupied a very conspicuous place in Buddhist
hagiographic literature. In narratives used for the edification of
Buddhist monks, women's bodies in decay (diseased, dying, and after
death) served as a central object for meditation, inspiring spiritual
growth through sexual abstention and repulsion in the immediate world.

Taking up a set of universal concerns connected with the representation
of women, Wilson displays the pervasiveness of androcentrism in Buddhist
literature and practice. She also makes persuasive use of recent
historical work on the religious lives of women in medieval
Christianity, finding common ground in the role of miraculous
afflictions.

This lively and readable study brings provocative new tools and insights
to the study of women in religious life.


Foreword
Catharine R. Stimpson
Preface
Note on Terminology
Introduction
1: Celibacy and the Social World
2: "Like a Boil with Nine Openings": Buddhist Constructions of the Body and
Their South Asian Milieu
3: False Advertising Exposed: Horrific Figurations of the Feminine in Pali
Hagiography
4: Lead Us Now into Temptation: Countering Samsaric Duplicity with Dharmic
Deceptions
5: Seeing Through the Gendered "I": The Nun's Story
Conclusion
Appendix: The Post-Asokan Milieu
Notes
Selected Bibliography
Index