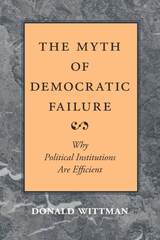 This book refutes one of the cornerstone beliefs of economics and political science: that economic markets are more efficient than the processes and institutions of democratic government.

Wittman first considers the characteristic of efficient markets—informed, rational participants competing for well-defined and easily transferred property rights—and explains how they operate in democratic politics. He then analyzes how specific political institutions are organized to operate efficiently. "Markets" such as the the Congress in the United States, bureaucracies, and pressure groups, he demonstrates, contribute to efficient political outcomes. He also provides a theory of institutional design to explain how these political "markets" arise. Finally, Wittman addresses the methodological shortcomings of analyses of political market failure, and offers his own suggestions for a more effective research strategy.


Acknowledgments
1: Introduction: The Market Metaphor
2: The Informed Voter
3: Electoral-Market Competition and the Control of Opportunistic Behavior
4: Transaction Costs and the Design of Government institutions
5: Homo Economicus versus Homo Psychologicus: Why Cognitive Psychology Does
Not Explain Democratic Politics
6: Legislative Markets and Organization
7: Pressure Groups
8: Bureaucratic Markets: Why Government Bureaucracies Are Efficient and Not
Too Large
9: The Market for Regulation
10: The Constitution as an Optimal Social Contract and the Role of
Transaction Costs in Constitutional Design
11: Majority Rule and Preference Aggregation
12: The Distribution of Economic Wealth and Political Power
13: The Testing of Theory
14: Epilogue: The Burden of Proof
References
Author Index
Subject index