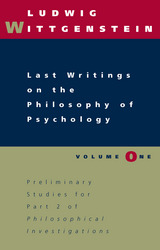 This bilingual volume—English and German on facing pages—brings together the writings Wittgenstein composed during his stay in Dublin between October 1948 and March 1949, one of his most fruitful periods. He later drew more than half of his remarks for Part II of Philosophical Investigations from this Dublin manuscript. A direct continuation of the writing that makes up the two volumes of Remarks on the Philosophy of Psychology, this collection offers scholars a glimpse of Wittgenstein's preliminary thinking on one of his most important works.