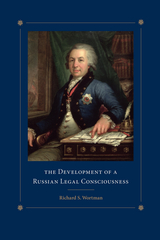 Until the nineteenth century, the Russian legal system was subject to an administrative hierarchy headed by the tsar, and the courts were expected to enforce, not interpret the law. Richard S. Wortman here traces the first professional class of legal experts who emerged during the reign of Nicholas I (1826 – 56) and who began to view the law as a uniquely modern and independent source of authority. Discussing how new legal institutions fit into the traditional system of tsarist rule, Wortman analyzes how conflict arose from the same intellectual processes that produced legal reform. He ultimately demonstrates how the stage was set for later events, as the autocracy and judiciary pursued contradictory—and mutually destructive—goals.
AUTHOR BIOGRAPHY

Richard S. Wortman is James Bryce Professor Emeritus of European Legal History at Columbia University. He is the author of Scenarios of Power: Myth and Ceremony in Russian Monarchy, From Peter the Great to the Abdication of Nicholas II, among numerous other books.


Frontmatter
Abbreviations
Acknowledgments
General Introduction
I. Autocracy and the Law
1. Absolutism and Justice in Eighteenth-Century Russia
2. Buraeucratization, Specialization, and Education
3. The Composition of the Russian Legal Administration in the First Half of the Nineteenth Century
II. The Men
4. Russia's First Minister of Justice
5. The Quiet Shelter
6. Count Dmitrii Nikolaevich Bludov
7. Count Victor Nikitich Panin
8. The Emergence of a Legal Ethos
III. Reform
9. The Aspiration to Legality
10. Epilogue and Conclusion
Notes
Bibliography
Index