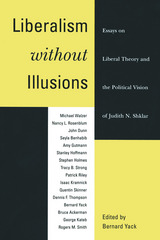 Well before her untimely death in 1992, Judith Shklar was widely recognized as one of the outstanding political theorists of our time. A pivotal figure in the reinvigoration of liberal theory during the past two decades, Shklar brought to life a complex world in which every vice has distinct political consequences and every virtue unavoidable costs. Her unique and unusually realistic approach to the study of liberal practices and institutions added psychological depth as well as a bracing pragmatism to the liberal political imagination.

In this tightly organized collection of essays, sixteen distinguished political theorists explore Shklar's intellectual legacy, focussing on both her own ideas and the broad range of issues that most intrigued her. The volume opens with a series of varied and illuminating assessments of Shklar's conception of liberal politics. The second section, with essays on Descartes and Racine, Hobbes, Rousseau, and Laski, emphasizes the relation between individual freedom and moral psychology in modern political thought. The third section addresses contemporary issues, such as the role of hypocrisy, offensive speech, and constitutional courts in liberal democracies. The book concludes with an autobiographical essay by Shklar that provides a vivid sense of her singular voice and personality.