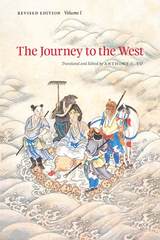 Anthony C. Yu’s translation of The Journey to the West,initially published in 1983, introduced English-speaking audiences to the classic Chinese novel in its entirety for the first time. Written in the sixteenth century, The Journey to the West tells the story of the fourteen-year pilgrimage of the monk Xuanzang, one of China’s most famous religious heroes, and his three supernatural disciples, in search of Buddhist scriptures. Throughout his journey, Xuanzang fights demons who wish to eat him, communes with spirits, and traverses a land riddled with a multitude of obstacles, both real and fantastical. An adventure rich with danger and excitement, this seminal work of the Chinese literary canonis by turns allegory, satire, and fantasy.
With over a hundred chapters written in both prose and poetry, The Journey to the West has always been a complicated and difficult text to render in English while preserving the lyricism of its language and the content of its plot. But Yu has successfully taken on the task, and in this new edition he has made his translations even more accurate and accessible. The explanatory notes are updated and augmented, and Yu has added new material to his introduction, based on his original research as well as on the newest literary criticism and scholarship on Chinese religious traditions. He has also modernized the transliterations included in each volume, using the now-standard Hanyu Pinyin romanization system. Perhaps most important, Yu has made changes to the translation itself in order to make it as precise as possible.

One of the great works of Chinese literature, The Journey to the West is not only invaluable to scholars of Eastern religion and literature, but, in Yu’s elegant rendering, also a delight for any reader.
AUTHOR BIOGRAPHY
Anthony C. Yu is the Carl Darling Buck Distinguished Service Professor Emeritus at the University of Chicago.
REVIEWS
“In 1983, Anthony C. Yu’s The Journey to the West conveyed intact to readers of English the classic that had enthralled Chinese children for centuries. It taught scholars that the novel’s many poems were as important as its prose. This new version draws on thirty years of the author’s further studies in literature and religion. It traces one theme after another to the Quanzhen Daoist movement and its new synthesis of religious thought. The translation is a joy to read, and the introduction and commentary reveal the deep foundations on which this fantastic tale of adventure is built.”
— Nathan Sivin, University of Chicago


Preface to Revised Edition
Preface to First Edition
Abbreviations
Introduction
1 The divine root conceives, its source revealed;
Mind and nature nurtured, the Great Dao is born.
2 Fully awoke to Bodhi’s wondrous truths,
He cuts off Māra, returns to the root, and joins Primal Spirit.
3 Four Seas and a Thousand Mountains all bow to submit;
From Ninefold Darkness ten species’ names are removed.
4 Appointed a BanHorse, could he be content?
Named Equal to Heaven, he’s still not appeased.
5 Disrupting the Peach Festival, the Great Sage steals elixir;
With revolt in Heaven, many gods would seize the fiend.
6 Guanyin, attending the banquet, inquires into the cause;
The Little Sage, exerting his power, subdues the Great Sage.
7 From the Eight Trigrams Brazier the Great Sage escapes;
Beneath the Five Phases Mountain, Mind Monkey is still.
8 Our Buddha makes scriptures to impart ultimate bliss;
Guanyin receives the decree to go up to Chang’an.
9 Chen Guangrui, going to his post, meets disaster;
Monk River Float, avenging his parents, repays his roots.
10 The Old Dragon King’s foolish schemes transgress Heaven’s decree;
Prime Minister Wei’s letter seeks help from an official of the dead.
11 Having toured the Underworld, Taizong returns to life;
Having presented melons and fruits, Liu Quan marries again.
12 The Tang emperor, firmly sincere, convenes a Grand Mass;
Guanyin, in epiphany, converts Gold Cicada.
13 In the den of tigers, the Gold Star brings deliverance;
At Double-Fork Ridge, Boqin detains the monk.
14 Mind Monkey returns to the Right;
The Six Robbers vanish from sight.
15 At Serpent Coil Mountain, the gods give secret protection;
At Eagle Grief Stream, the Horse of the Will is reined.
16 At Guanyin Hall the monks plot for the treasure;
At Black Wind Mountain a monster steals the cassock.
17 Pilgrim Sun greatly disturbs Black Wind Mountain;
Guanshiyin brings to submission the bear monster.
18 At Guanyin Hall the Tang Monk leaves his ordeal;
At Gao Village the Great Sage casts out the monster.
19 At Cloudy Paths Cave, Wukong takes in Eight Rules;
At Pagoda Mountain, Tripitaka receives the Heart Sūtra.
20 At Yellow Wind Ridge the Tang Monk meets adversity;
In mid- mountain, Eight Rules strives to be first.
21 The Vihārapālas prepare lodging for the Great Sage;
Lingji of Sumeru crushes the wind demon.
22 Eight Rules fights fiercely at Flowing-Sand River;
Mokṣa by order receives Wujing’s submission.
23 Tripitaka does not forget his origin;
The Four Sages test the priestly mind.
24 At Long Life Mountain the Great Immortal detains his old friend;
At Five Villages Abbey, Pilgrim steals the ginseng fruit.
25 The Zhenyuan Immortal gives chase to catch the scripture monk;
Pilgrim Sun greatly disturbs Five Villages Abbey.
Notes
Index