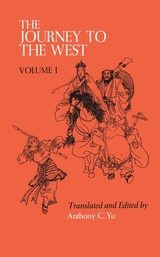 First published in 1952, The Journey to the West, volume I, comprises the first twenty-five chapters of Anthony C. Yu's four-volume translation of Hsi-yu Chi, one of the most beloved classics of Chinese literature. The fantastic tale recounts the sixteen-year pilgrimage of the monk Hsüan-tsang (596-664), one of China's most illustrious religious heroes, who journeyed to India with four animal disciples in quest of Buddhist scriptures. For nearly a thousand years, his exploits were celebrated and embellished in various accounts, culminating in the hundred-chapter Journey to the West, which combines religious allegory with romance, fantasy, humor, and satire.
TABLE OF CONTENTS
Contents
Preface
Abbreviations
Introduction
1. The divine root being conceived, the origin emerges; The moral nature once cultivated, the Great Tao is born.
2. The true wondrous doctrine of Bodhi thoroughly comprehended ; The destruction of Māra and the return to origin unify the soul.
3. The Four Seas and the Thousand Mountains all bow in submission; From the Hell of Ninefold Darkness are deleted the names of ten species.
4. Appointed to the post of Pi-ma, how can he be satisfied? Though his name is Equal to Heaven, he is still discontented.
5. The Great Sage, stealing elixir, disrupts the Peach Festival; Many gods try to catch the monster, a rebel in Heaven.
6. Kuan-yin, attending the banquet, inquires into the affair; The Little Sage, exerting his power, subdues the Great Sage.
7. From the Brazier of Eight Trigrams the Great Sage escapes; Beneath the Five-Phases Mountain the Monkey of the Mind is stilled.
8. The Sovereign Buddha has made scriptures to impart ultimate bliss; Kuan-yin receives the decree to go up to Ch'ang-an.
9. Ch'ên Kuang-jui, going to his post, meets disaster; Monk River Float, avenging his parents, repays their kindness.
10. The Old Dragon King, in foolish schemes, transgresses Heaven's decrees; Prime Minister Wei sends a letter to an official of the dead.
11. Having toured the underworld, T'ai-tsung returns to life; Having presented melons and fruits, Liu Ch'iian marries again.
12. The T'ang emperor, firm in sincerity, convenes the Grand Mass; Kuan-yin, revealing herself, converts Gold Cicada.
13. In the Den of Tigers, the Gold Star brings deliverance; At Double-Fork Ridge, Po-ch'in detains the monk.
14. The Monkey of the Mind returns to the Right; All the Six Robbers vanish from sight.
15. At Serpent Coil Mountain, many gods give secret protection; At Eagle Grief Stream the Horse of the Will is held and reined.
16. At Kuan-yin Hall the monks plot for the treasure; At Black Wind Mountain the monster steals the cassock.
17. Pilgrim Sun greatly disturbs the Black Wind Mountain; Kuan-shih-yin brings to submission the Bear Monster.
18. At the Kuan-yin Hall the T'ang monk escapes his ordeal; At the Kao Village the Great Sage disposes of the monster.
19. At Cloudy Paths Cave. Wu-k'ung apprehends Pa-chieh; At Pagoda Mountain, Tripitaka receives the Heart Sūtra.
20. At Yellow Wind Ridge the T'ang monk meets adversity; In mid-mountain, Pa-chieh strives to be first.
21. The Viharapalas prepare lodging for the Great Sage: Ling-chi of Sumeru crushes the Wind Demon.
22. Pa-chieh fights fiercely at the Flowing-Sand River; By order Moksa brings Wu-ching to submission.
23. Tripitaka does not forget his origin; The Four Sages test the priestly mind.
24. At the Mountain of Longevity, the Great Immortal detains his old friend; At the Temple of Five Villages, Pilgrim steals the ginseng fruit.
25. The Chên-yüan Immortal gives chase to catch the scripture monk; Pilgrim Sun causes great disturbance at the Temple of Five Villages .
Notes
REQUEST ACCESSIBLE FILE