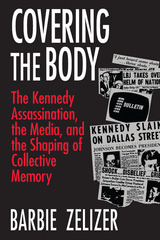 Images of the assassination of John F. Kennedy are burned deeply into the memories of millions who watched the events of November 1963 unfold live on television. Never before had America seen an event of this magnitude as it happened. But what is it we remember? How did the near chaos of the shooting and its aftermath get transformed into a seamless story of epic proportions? In this book, Barbie Zelizer explores the way we learned about and came to make sense of the killing of the president.

Covering the Body (the title refers to the charge given journalists to follow a president) is a powerful reassessment of the media's role in shaping our collective memory of the assassination—at the same time as it used the assassination coverage to legitimize its own role as official interpreter of American reality. Of the more than fifty reporters covering Kennedy in Dallas, no one actually saw the assassination. And faced with a monumentally important story that was continuously breaking, most journalists had no time to verify leads or substantiate reports. Rather, they took discrete moments of their stories and turned them into one coherent narrative, blurring what was and was not "professional" about their coverage.

Through incisive analyses of the many accounts and investigations in the years since the shooting, Zelizer reveals how journalists used the assassination not just to relay the news but to address the issues they saw as central to the profession and to promote themselves as cultural authorities. Indeed, argues Zelizer, these motivations are still alive and are at the core of the controversy surrounding Oliver Stone's movie, JFK.

At its heart, Covering the Body raises serious questions about the role of the media in defining our reality, and shaping our myths and memories. In tracing how journalists attempted to answer questions that still trouble most Americans, Zelizer offers a fascinating analysis of the role of the media as cultural authorities.
TABLE OF CONTENTS