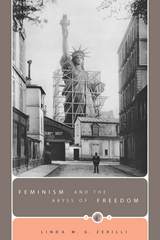 In contemporary feminist theory, the problem of feminine subjectivity persistently appears and reappears as the site that grounds all discussion of feminism. In Feminism and the Abyss of Freedom, Linda M. G. Zerilli argues that the persistence of this subject-centered frame severely limits feminists' capacity to think imaginatively about the central problem of feminist theory and practice: a politics concerned with freedom.

Offering both a discussion of feminism in its postmodern context and a critique of contemporary theory, Zerilli here challenges feminists to move away from a theory-based approach, which focuses on securing or contesting "women" as an analytic category of feminism, to one rooted in political action and judgment. She revisits the democratic problem of exclusion from participation in common affairs and elaborates a freedom-centered feminism as the political practice of beginning anew, world-building, and judging.

In a series of case studies, Zerilli draws on the political thought of Hannah Arendt to articulate a nonsovereign conception of political freedom and to explore a variety of feminist understandings of freedom in the twentieth century, including ones proposed by Judith Butler, Monique Wittig, and the Milan Women's Bookstore Collective. In so doing, Zerilli hopes to retrieve what Arendt called feminism's lost treasure: the original and radical claim to political freedom.
AUTHOR BIOGRAPHY
Linda M. G. Zerilli is professor of political science at Northwestern University. She is the author of Signifying Woman: Culture and Chaos in Rousseau, Burke, and Mill.

REVIEWS
"In her wonderful new book . . . Linda Zerilli tells a story of how feminist politics has been framed in ways that subvert its connection to freedom. . . . Zerilli tells a story that shifts feminism off its foundation and onto the shaky grounds of freedom."
— Sharon M. Meagher, APA Newsletter

"A significant and engaging book. It throws down an important challenge not only to feminists but also to political theorists: how to think of political freedom outside the frame of the subject."
— Moya Lloyd, Redescription

CHAPTER ONE
Feminists Know Not What They Do: Judith Butler's Gender Trouble
and the Limits of Epistemology
Theory—The Craving for Generality?
A Wittgensteinian Reading of the Feminist Foundations Debate
Doing Gender, Following a Rule
Radical Imagination and Figures of the Newly Thinkable
Toward a Freedom-Centered Feminist Theory

CHAPTER TWO
Feminists Are Beginners: Monique Wittig's Les guérillères
and the "Problem of the New"
The Limits of Doubt
Language as a "War Machine"
Renversement
No-More and Not-Yet
Elles—A Fantastic Universal

CHAPTER THREE
Feminists Make Promises: The Milan Collective's Sexual Difference
and the Project of World-Building
Tearing Up the Social Contract
The Desire for Reparation
The Problem with Equality
Discovering Disparity
A Political Practice of Sexual Difference
Refiguring Rights

CHAPTER FOUR
Feminists Make Judgments: Hannah Arendt's Lectures on Kant's
Political Philosophy and the Affirmation of Freedom
Judgment and the "Problem of the New"
The Old Problem of Objectivity
Judging without a Concept
One Concept of Validity
A Political Concept of Validity
From World-Disclosure to World-Opening
"Being and thinking in my own identity where actually I am not"
Imagination and Freedom
Sensus Communis and the Practice of Freedom