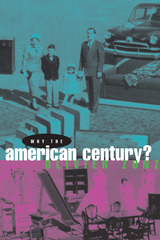 Reinterpreting our country's rise to world power, Olivier Zunz shows how American elites appropriated the twentieth century. Policymakers, corporate managers, engineers, scientists, and social scientists promoted a social contract of abundance and a controversial theory of pluralism. Their efforts created a model of middle class behavior for America and for the rest of the world.

"It should certainly be the task of historians to explain the nation's triumphs as effectively as they have explained its failures, and Zunz in this intelligent, learned and ambitious book suggests a valuable new model for doing so."—Alan Brinkley, Times Literary Supplement

"Zunz is evenhanded in his judgments. . . . His thesis is both imaginative and well grounded in the appropriate sources."—David M. Oshinsky, New York Times Book Review

"Zunz is an innovative and perceptive social critic. He crosses disciplinary boundaries with ease and felicity, and is particularly adept at illustrating large themes with unusual but telling details."—Kent Blaser, American Studies

"An eye-opening introduction to the shaping of modern America."—Foreign Affairs
TABLE OF CONTENTS