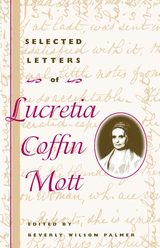 Selected Letters of Lucretia Coffin Mott
edited by Beverly Wilson Palmer
University of Illinois Press, 2002
Cloth: 978-0-252-02674-4
This landmark volume makes widely available for the first time the correspondence of the Quaker activist Lucretia Coffin Mott. Scrupulously reproduced and annotated, these letters illustrate the length and breadth of her public life as a leading reformer while providing an intimate glimpse of her family life.

Dedicated to reform of almost every kind--temperance, peace, equal rights, woman suffrage, nonresistance, and the abolition of slavery--Mott viewed woman's rights as only one element of a broad-based reform agenda for American society. A founder and leader of many antislavery organizations, including the racially integrated American Antislavery Society and the Philadelphia Female Anti-slavery Society, she housed fugitive slaves, maintained lifelong friendships with such African-American colleagues as Harriet Tubman and Sojourner Truth, and agitated to bring her fellow Quakers into consensus on taking a stand against slavery.

Mott was a seasoned activist by 1848 when she helped to organize the Seneca Falls Woman's Rights Convention, whose resolutions called for equal treatment of women in all arenas. Mott tried to pursue a neutral course when her friends Elizabeth Cady Stanton and Susan B. Anthony disagreed with other woman's rights leaders over the Fifteenth Amendment, which guaranteed equal rights for freedmen but not for any women. Her private views on this breach within the woman's movement emerge for the first time in these letters.

An active public life, however, is only half the story of this dedicated and energetic woman. Mott and her husband of fifty-six years, James, raised five children to adulthood, and her letters to other reformers and fellow Quakers are interspersed with the informal "hurried scraps" she wrote to and about her cherished family.

An invaluable resource on an extraordinary woman, these selected letters reveal the incisive mind, clear sense of mission, and level-headed personality that made Lucretia Coffin Mott a natural leader and a major force in nineteenth-century American life.
AUTHOR BIOGRAPHY
Beverly Wilson Palmer, coordinator of the writing program at Pomona College, is the editor of The Selected Letters of Charles Sumner and The Selected Papers of Thaddeus Stevens.