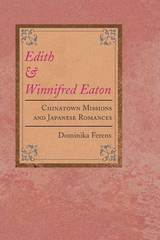 Edith and Winnifred Eaton: Chinatown Missions and Japanese Romances
by Dominika Ferens
University of Illinois Press, 2002
Cloth: 978-0-252-02721-5
Daughters of a British father and a Chinese mother, Edith and Winnifred Eaton pursued wildly different paths. While Edith wrote stories of downtrodden Chinese immigrants under the pen name Sui Sin Far, Winnifred presented herself as Japanese American and published Japanese romance novels in English under the name Onoto Watanna. In this invigorating reappraisal of the vision and accomplishments of the Eaton sisters, Dominika Ferens departs boldly from the dichotomy that has informed most commentary on them: Edith's "authentic" representations of Chinese North Americans versus Winnifred's "phony" portrayals of Japanese characters and settings.
Arguing that Edith as much as Winnifred constructed her persona along with her pen name, Ferens considers the fiction of both Eaton sisters as ethnography. Edith and Winnifred Eaton suggests that both authors wrote through the filter of contemporary ethnographic discourse on the Far East and also wrote for readers hungry for "authentic" insight into the morals, manners, and mentality of an exotic other.

Ferens traces two distinct discursive traditions–-missionary and travel writing–-that shaped the meanings of "China" and "Japan" in the nineteenth century. She shows how these traditions intersected with the unconventional literary careers of the Eaton sisters, informing the sober, moralistic tone of Edith's stories as well as Winnifred's exotic narrative style, plots, settings, and characterizations.

Bringing to the Eatons' writings a contemporary understanding of the racial and textual politics of ethnographic writing, this important account shows how these two very different writers claimed ethnographic authority, how they used that authority to explore ideas of difference, race, class and gender, and how their depictions of nonwhites worked to disrupt the process of whites' self-definition.
AUTHOR BIOGRAPHY
Dominika Ferens is a professor at the Institute of English at the University of Wroclaw.
REVIEWS
"These intercultural writers are interesting in themselves, but Ferens uses this discussion to make some important points about racism in the U.S. This important work should be in every academic and large public library."--Choice


"Informative and reflective, thoughtful and thought-provoking, [this volume] open[s] new possibilities for reading and writing about Asian American literature, and for (re)considering the discourse of orientalism and its role in the development of personal and literary strategies for self-expression, social critique, and survival."--Canadian Literature