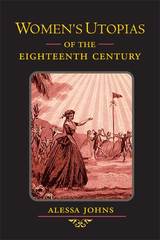 Women's Utopias of the Eighteenth Century
by Alessa Johns
University of Illinois Press, 2003
Cloth: 978-0-252-02841-0
No human society has ever been perfect, a fact that has led thinkers as far back as Plato and St. Augustine to conceive of utopias both as a fanciful means of escape from an imperfect reality and as a useful tool with which to design improvements upon it.

The most studied utopias have been proposed by men, but during the eighteenth century a group of reform-oriented female novelists put forth a series of work that expressed their views of, and their reservations about, ideal societies. In Women's Utopias of the Eighteenth Century, Alessa Johns examines the utopian communities envisaged by Mary Astell, Sarah Fielding, Mary Hamilton, Sarah Scott, and other writers from Britain and continental Europe, uncovering the ways in which they resembled--and departed from--traditional utopias.

Johns demonstrates that while traditional visions tended to look back to absolutist models, women's utopias quickly incorporated emerging liberal ideas that allowed far more room for personal initiative and gave agency to groups that were not culturally dominant, such as the female writers themselves. Women's utopias, Johns argues, were reproductive in nature. They had the potential to reimagine and perpetuate themselves.
TABLE OF CONTENTS