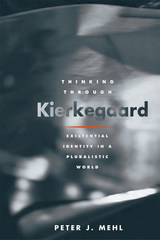 Thinking through Kierkegaard is a critical evaluation of Søren Kierkegaard's vision of the normatively human, of who we are and might aspire to become, and of what Mehl calls our existential identity. Through a pragmatist examination of three of Kierkegaard's key pseudonymous "voices" (Judge William, Climacus, and Anti-Climacus), Peter J. Mehl argues that Kierkegaard's path is not the only end of our search, but instead leads us to affirm a plurality of paths toward a fulfilling existential identity.
Contrary to Kierkegaard's ideal of moral personhood and orthodox Christian identity, Mehl aims to acknowledge the possibility of pluralism in existential identities. By demanding sensitivity to the deep ways social and cultural context influences human perception, interpretation and self?representation, Mehl argues that Kierkegaard is not simply discovering but also participating in a cultural construction of the human being.
Drawing on accounts of what it is to be a person by prominent philosophers outside of Kierkegaard scholarship, including Charles Taylor, Owen Flanagan, Alasdair MacIntyre, and Thomas Nagel, Mehl also works to bridge the analytic and continental traditions and reestablishes Kierkegaard as a rich resource for situating moral and spiritual identity. This reexamination of Kierkegaard is recommended for anyone interested in what it means to be a person.
AUTHOR BIOGRAPHY
Peter J. Mehl is a professor of philosophy and religion and an associate dean in the College of Liberal Arts at the University of Central Arkansas.
TABLE OF CONTENTS