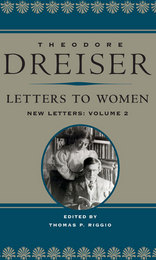 Theodore Dreiser led a long and controversial life, almost always pursuing some serious question, and not rarely pursuing women. This collection, the second volume of Dreiser correspondence to be published by the University of Illinois Press, gathers previously unpublished letters Dreiser wrote to women between 1893 and 1945, many of them showing personal feelings Dreiser revealed nowhere else. Here he both preens and mocks himself, natters and scolds, relates his jaunts with Mencken and his skirmishes with editors and publishers. He admits his worries, bemoans his longings, and self-consciously embarks on love letters that are unafraid to smolder and flame. To one reader he sends “Kisses, Kisses, Kisses, for your sweety mouth” and urges his needy requests: “Write me a love-letter Honey girl.” Alongside such amorous play, he often expressed his deepest feelings on philosophical, religious, and social issues that characterize his public writing.

Chronologically arranged and meticulously edited by Thomas P. Riggio, these letters reveal how wide and deep Dreiser’s needs were. Dreiser often discussed his writing in his letters to women friends, telling them what he wanted to do, where he thought he succeeded and failed, and seeking approval or criticism. By turns seductive, candid, coy, and informative, these letters provide an intimate view of a master writer who knew exactly what he was after.