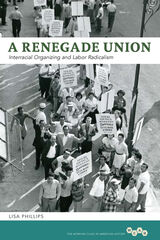 Dedicated to organizing workers from diverse racial, ethnic, and religious backgrounds, many of whom were considered "unorganizable" by other unions, the progressive New York City-based labor union District 65 counted among its 30,000 members retail clerks, office workers, warehouse workers, and wholesale workers. In this book, Lisa Phillips presents a distinctive study of District 65 and its efforts to secure economic equality for minority workers in sales and processing jobs in small, low-end shops and warehouses throughout the city. Phillips shows how organizers fought tirelessly to achieve better hours and higher wages for "unskilled," unrepresented workers and to destigmatize the kind of work they performed.
Closely examining the strategies employed by District 65 from the 1930s through the early Cold War years, Phillips assesses the impact of the McCarthy era on the union's quest for economic equality across divisions of race, ethnicity, and skill. Though their stories have been overshadowed by those of auto, steel, and electrical workers who forced American manufacturing giants to unionize, the District 65 workers believed their union provided them with an opportunity to re-value their work, the result of an economy inclining toward fewer manufacturing jobs and more low-wage service and processing jobs.
Phillips recounts how District 65 first broke with the CIO over the latter's hostility to left-oriented politics and organizing agendas, then rejoined to facilitate alliances with the NAACP. In telling the story of District 65 and detailing community organizing efforts during the first part of the Cold War and under the AFL-CIO umbrella, A Renegade Union continues to revise the history of the left-led unions of the Congress of Industrial Organizations.

TABLE OF CONTENTS
Cover
Title Page
Copyright
Contents
Acknowledgments
List of Acronyms
Introduction
1. Community-Based, “Catch-All” Organizing on New York’s Lower East Side
2. Getting beyond Racial, Ethnic, Religious, and Skill-Based Divisions
3. “Like a Scab over an Infected Sore”: Full and Fair Employment during and after World War II
4. Attacked from the Right and the Left: Community-Organizing, Civic Unionism during the Early
5. A Third Labor Federation?: The Distributive, Processing, and Office Workers of America (DPO)
6. Community Organizing under the AFL-CIO Umbrella
Conclusion
Abbreviated Chronology
Notes
Index