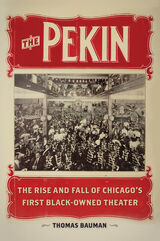 In 1904, political operator and gambling boss Robert T. Motts opened the Pekin Theater in Chicago. Dubbed the "Temple of Music," the Pekin became one of the country's most prestigious African American cultural institutions, renowned for its all-black stock company and school for actors, an orchestra able to play ragtime and opera with equal brilliance, and a repertoire of original musical comedies.

The Pekin's prestige and profitability faltered after Motts' death in 1911 as his heirs lacked his savvy, and African American elites turned away from pure entertainment in favor of spiritual uplift. But, as Bauman shows, the theater had already opened the door to a new dynamic of both intra- and inter-racial theater-going and showed the ways a success, like the Pekin, had a positive economic and social impact on the surrounding community.
AUTHOR BIOGRAPHY
Thomas Bauman is a professor of musicology at Northwestern University. He is the author of North German Opera in the Age of Goethe.
TABLE OF CONTENTS
Cover
Title
Contents
List of Figures
List of Musical Examples
Acknowledgments
Introduction
Prologue—1903: Chicago's Black Gambling World
1. The Temple of Music
2. The New Pekin
3. Tacking to the Wind
4. Holding the Stroll
5. Mott's Last Years
6. From Pillar to Post
Epilogue—Diaspora
Appendix A: Repertoire of the Pekin Theater
Appendix B: Musical Items Performed at the Pekin Theater, Chicago, 1906–1911
Notes
Bibliography
Index