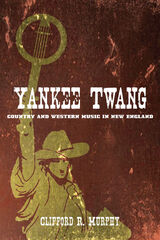 Merging scholarly insight with a professional guitarist's sense of the musical life, Yankee Twang delves into the rich tradition of country & western music that is played and loved in the mill towns and cities of the American northeast. Scholar and musician Clifford R. Murphy draws on a wealth of ethnographic material, interviews, and encounters with recorded and live music to reveal the central role of country and western in the social lives and musical activity of working-class New Englanders.

As Murphy shows, an extraordinary multiculturalism sets New England country and western music apart from other regional and national forms. Once segregated at work and worship, members of different ethnic groups used the country and western popularized on the radio and by barnstorming artists to come together at social events, united by a love of the music. Musicians, meanwhile, drew from the wide variety of ethnic musical traditions to create the New England style.

But the music also gave--and gives--voice to working-class feeling. Murphy explores how the Yankee love of country and western emphasizes the western, reflecting the longing of many blue collar workers for the mythical cowboy's life of rugged but fulfilling individualism. Indeed, many New Englanders use country and western to comment on economic disenfranchisement and express their resentment of a mass media, government, and Nashville music establishment that they believe neither reflects their experiences nor considers them equal participants in American life.