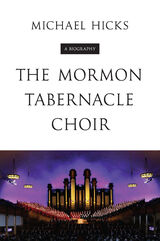 A first-of-its-kind history, The Mormon Tabernacle Choir tells the epic story of how an all-volunteer group founded by persecuted religious outcasts grew into a multimedia powerhouse synonymous with the mainstream and with Mormonism itself.

Drawing on decades of work observing and researching the Mormon Tabernacle Choir, Michael Hicks examines the personalities, decisions, and controversies that shaped "America's choir." Here is the miraculous story behind the Tabernacle's world-famous acoustics, the anti-Mormonism that greeted early tours, the clashes with Church leaders over repertoire and presentation, the radio-driven boom in popularity, the competing visions of rival conductors, and the Choir's aspiration to be accepted within classical music even as Mormons sought acceptance within American culture at large. Everything from Billboard hits to TV appearances to White House performances paved the way for Mormonism's crossover triumph. Yet, as Hicks shows, such success raised fundamental concerns regarding the Choir's mission, functions, and image.
AUTHOR BIOGRAPHY
Michael Hicks is a professor of music at Brigham Young University and the author of Mormonism and Music: A History and Sixties Rock: Garage, Psychedelic, and Other Satisfactions.
TABLE OF CONTENTS
Cover
Title Page
Copyright
Contents
Introduction
1. Books and Angels
2. Buildings and Professors
3. “My Tabernacle ‘Mormon’ Choir”
4. The Power of the Air
5. From within the Shadow
6. A Cultural Necessity
7. Soft Sell
8. The Endless Postlude
Notes
Index