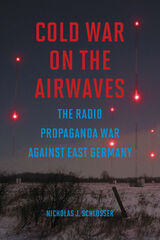 Founded as a counterweight to the Communist broadcasters in East Germany, Radio in the American Sector (RIAS) became one of the most successful public information operations conducted against the Soviet Bloc. Cold War on the Airwaves examines the Berlin-based organization's history and influence on the political worldview of the people--and government--on the other side of the Iron Curtain.

Nicholas J. Schlosser draws on broadcast transcripts, internal memoranda, listener letters, and surveys by the U.S. Information Agency to profile RIAS. Its mission: to undermine the German Democratic Republic with propaganda that, ironically, gained in potency by obeying the rules of objective journalism. Throughout, Schlosser examines the friction inherent in such a contradictory project and propaganda's role in shaping political culture. He also portrays how RIAS's primarily German staff influenced its outlook and how the organization both competed against its rivals in the GDR and pushed communist officials to alter their methods in order to keep listeners.

From the occupation of Berlin through the airlift to the construction of the Berlin Wall, Cold War on the Airwaves offers an absorbing view of how public diplomacy played out at a flashpoint of East-West tension.

AUTHOR BIOGRAPHY
Nicholas J. Schlosser is a historian at the U.S. Army Center of Military History. He received his bachelor's degree from Binghamton University in 2002 and his doctorate in history from the University of Maryland, College Park, in 2008. He is the coeditor of Counterinsurgency Leadership in Afghanistan, Iraq, and Beyond.
TABLE OF CONTENTS
Cover
Title
Contents
Acknowledgments
Abbreviations
1. Between Objectivity and Engagement
2. Radio Propaganda during the Occupation, 1945–1949
3. Building a Rival Fourth Estate: RIAS’s Campaign against East Germany
4. RIAS Berlin and the June 17, 1953, Uprising in East Germany
Photographs
5. The East German Campaign against RIAS
6. RIAS and the Berlin Crisis of 1958–1961
Epilogue: RIAS, 1963–1992
Notes
Sources and Bibliography
Index