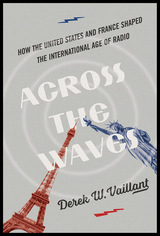 In 1931, the United States and France embarked on a broadcasting partnership built around radio. Over time, the transatlantic sonic alliance came to personify and to shape American-French relations in an era of increased global media production and distribution.

Drawing on a broad range of American and French archives, Derek Vaillant joins textual and aural materials with original data analytics and maps to illuminate U.S.-French broadcasting's political and cultural development. Vaillant focuses on the period from 1931 until France dismantled its state media system in 1974. His analysis examines mobile actors, circulating programs, and shifting institutions that shaped international radio's use in times of war and peace. He explores the extraordinary achievements, the miscommunications and failures, and the limits of cooperation between America and France as they shaped a new media environment. Throughout, Vaillant explains how radio's power as an instantaneous mass communications tool produced, legitimized, and circulated various notions of states, cultures, ideologies, and peoples as superior or inferior.

A first comparative history of its subject, Across the Waves provocatively examines how different strategic agendas, aesthetic aims and technical systems shaped U.S.-French broadcasting and the cultural politics linking the United States and France.

AUTHOR BIOGRAPHY
Derek W. Vaillant is a professor of communication studies and professor of history, by courtesy, at the University of Michigan. He is the author of Sounds of Reform: Progressivism and Music in Chicago, 1873-1935.
REVIEWS
"The atmospheric way Vaillant brings radio to us in this book should be nothing short of highly commended." --EuropeNow


"Vaillant's text is outstanding. The research and reporting are carefully and professionally done, the supporting data enlightening and the story interesting. . . . Across the Waves makes a significant contribution to international media scholarship."--American Journalism

"A well-written piece of historical analysis, and the author manages to tie together an enjoyable writing style with scholarly rigour and a complex conceptual framework." --Historical Journal of Film, Radio, and Television