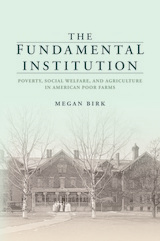 By the early 1900s, the poor farm had become a ubiquitous part of America's social welfare system. Megan Birk's history of this foundational but forgotten institution focuses on the connection between agriculture, provisions for the disadvantaged, and the daily realities of life at poor farms. Conceived as an inexpensive way to provide care for the indigent, poor farms in fact attracted wards that ranged from abused wives and the elderly to orphans, the disabled, and disaster victims. Most people arrived unable rather than unwilling to work, some because of physical problems, others due to a lack of skills or because a changing labor market had left them behind. Birk blends the personal stories of participants with institutional histories to reveal a loose-knit system that provided a measure of care to everyone without an overarching philosophy of reform or rehabilitation.

In-depth and innovative, The Fundamental Institution offers an overdue portrait of rural social welfare in the United States.

AUTHOR BIOGRAPHY
Megan Birk is a professor of history at University of Texas Rio Grande Valley. She is the author of Fostering on the Farm: Child Placement in the Rural Midwest.
REVIEWS
"A well-argued book based on impressive research and organized in a set of well-constructed chapters. It is an impressive contribution to the history of American social welfare systems and to American rural life from 1870s to 1930." --Missouri Historical Review


"Informative and thoroughly researched, The Fundamental Institution tells the largely unknown story of America’s poor farms. Megan Birk argues persuasively that white rural poverty was commonplace, and poor farms were an essential part of localized public welfare systems until the 1930s. A valuable study."--Molly Ladd-Taylor, author of Fixing the Poor: Eugenic Sterilization and Child Welfare in the Twentieth Century

1 The Founding of Community Institutions 15

3 Farming for the County 74